(as part of our BTW fun stories)

By the way: Halloween is celebrated in many countries on October 31st.

In the United States, Halloween is the most celebrated holiday after Christmas and Thanksgiving. But for most Eritreans all over the world I don’t think it concerns us much. Those of us residing in the US may do something to please our American friends or neighbors. We will also get prepared to offer candies to the neighboring kids who knock on our doors asking for treats with the phrase “Trick or treat”.

By the way, what is the history of Halloween?  Halloween’s origins date back to the ancient Celtic festival of Samhain, (Samhain is their god, lord of the dead), when it was believed the boundary between the worlds of the living and the dead became blurred. It has since evolved into a holiday when spooky legends, myths and folklore take center stage. Through costumes, stories and celebrations during the Halloween season, mythical beings, from witches to zombies to werewolves all come to life. Each of the season’s creepy beings carries its own dark history.

Many Americans believe that celebrating Halloween is fun. One of my very close friends recently told me “It’s a fun time for us and our children, who dress up in scary clothes, and go around trick or treating and having lots of fun” Fun? I am not so sure about that? Can we call dressing up our children as vampires, ghosts, devils and witches as fun?

We, Eritreans, do not celebrate Halloween as a formal holiday, and we are not amazed by the spooky stories, myths or folktales that are repeatedly echoed during this holiday celebration. However, I remember, when I was a kid, a spooky story that was widely spread among the Eritrean people and especially the Asmara residents.  One of the ghost stories that was always told was the story of Anderebo. This mythical creature usually appears after sundown and somehow throws enormous stones to the roof. Strangely the creature vanishes in the morning, but the stones are visible on the rooftop. This at that time was a terrifying story for kids of my age.

Another story of an entrapped ghost that was narrated at that time was a story of an old Italian man who died when his car was overturned on the road to Massawa in a particular location named Dongolo Alto. It was told that the ghost or Fantasma, as was termed by the local people, of this old Italian guy was revisiting the area of Dongolo Alto. The Fantasma used to ask for a ride, mostly to Asmara and sometimes to Massawa, wearing a black coat. He stops a car passing by him and he smiles and asks for a lift. The driver who felt bad for this old man decided to give him a lift. Throughout the drive they would talk about weather and general stuff but after a few kilometers ride the ghost/Fantasma suddenly disappears. One can imagine how the driver may feel about this. It was told that most of the drivers were experiencing cardiac arrest. To hear this story as a kid was really frightening.

These stories are examples of evil spirits and souls of the dead passed through the barrier and entered the world of the living. Departed family members would revisit their earthly homes, and it is believed that these spirits and dead souls could torment the living. Halloween has always been a holiday filled with mystery, magic and superstition. But for most Eritreans this is just a fairytale, and does not bother us. Few days ago I saw a T-shirt that states “You can’t scare me, I’m Eritrean.” I think we can all attest that, as Eritreans, this goes for everything and not just Halloween. 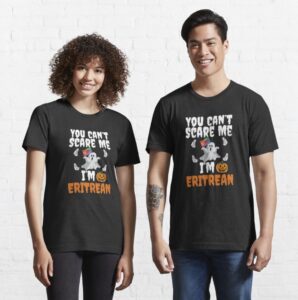